One of the new and exciting features in Evolution, available as of the 5.1.3 update, is Enterprise Monitoring!

Enterprise monitoring provides insight into the system, specifically related to performance and utilization of available resources, via easy to interpret reports.

The reports can highlight bottlenecks or errors such as an overloaded system needing additional CPU resources or RAM, packets and associated packet loss, a runaway process, or even commonly incurred issues such as network congestion.  Enterprise Monitoring also features the ability to define parameters for alerts which will bring potential issues to your attention before they impact your organization.

Additionally, the ability to establish a consistent ping to any destination for networking metrics, as well as see how many SIP peers have been registered with the system and their associated round-trip times, can provide valuable information when troubleshooting commonly encounter connectivity issues.

To run a report, you will need to login into your Evolution PBX and click on the Enterprise Monitoring tab.  From there you will need to choose the tab associated with the type of report you want to view data for and define the parameters in the drop-down menus for the report.

The available drop-down options for the reporting output are as follows:

After choosing your report type and selecting the appropriate input, you will need to click on 'Run Report' to view the data.

For example, in the screenshot below, we are running an overview report from 12:20pm, looking back at the last 60 minutes: 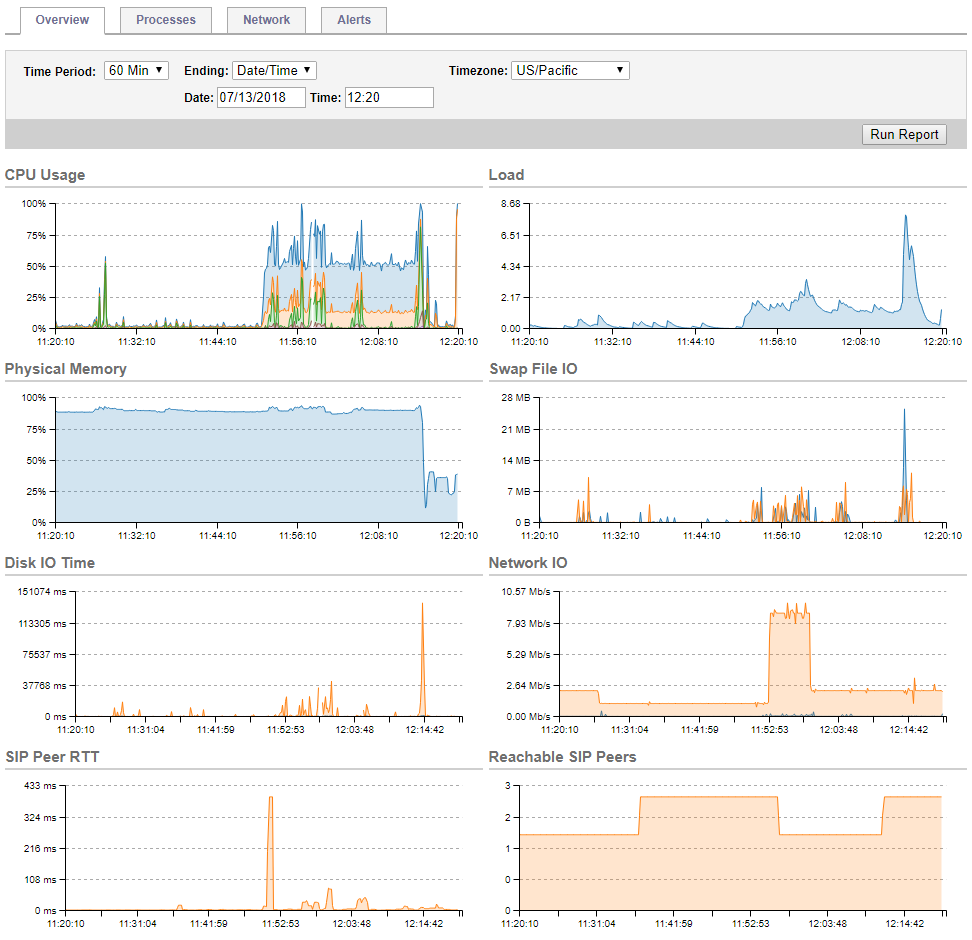 In this example, we are looking at the last 30 minutes of system activity (the default): 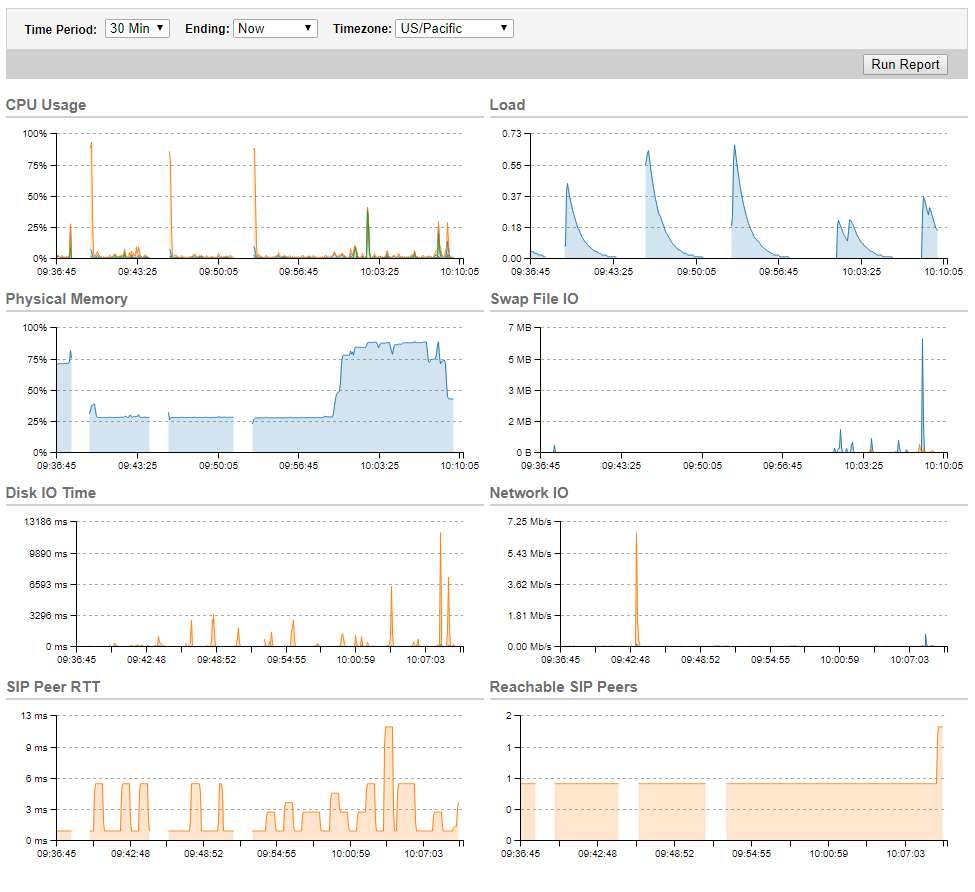 Additionally, if you hover over any of the graphs in any of the reports, you will be provided with more detailed information: 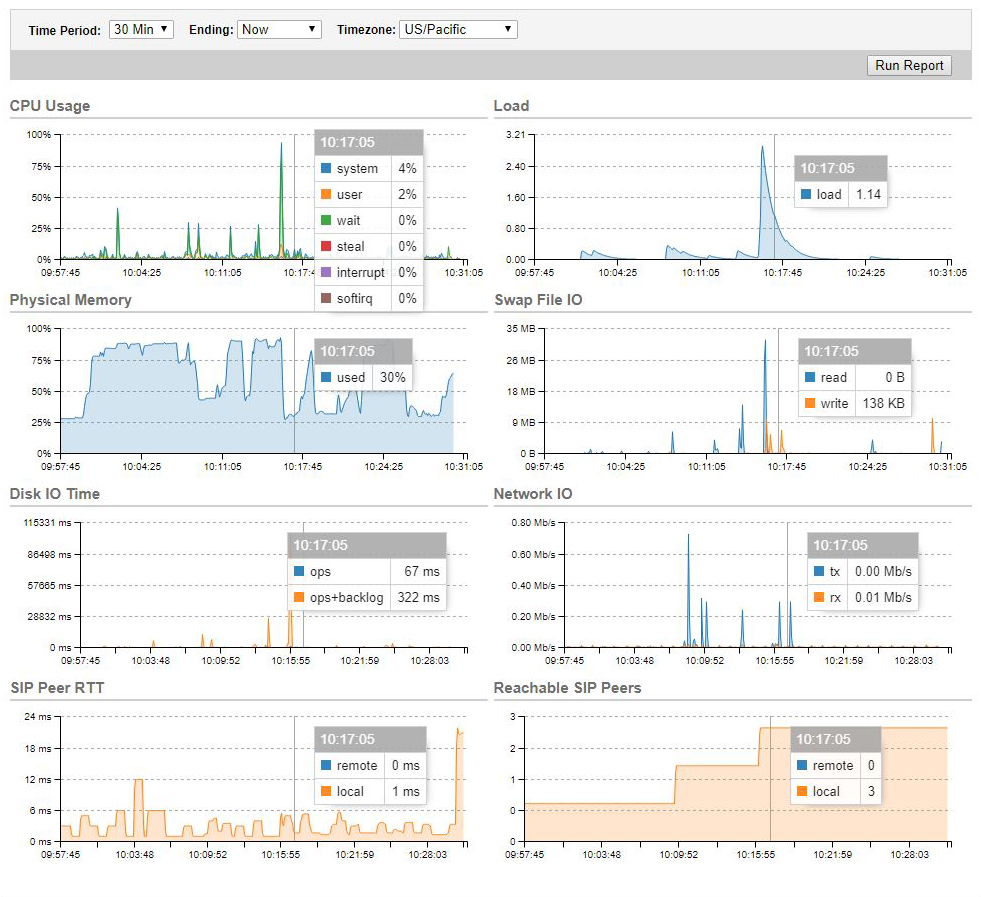 The Overview aspect of the Enterprise Monitoring provides quite a bit of information about the overall performance and health of your Evolution PBX.

The information included consist of:

An Example of the Overview report:

Note: the overview report provides metrics on registered SIP devices, as well as the average RTT.  This information can be extremely useful when troubleshooting quality and reach-ability issues for SIP end points.

The Processes report provides measurements of the historical and current use of the processing and memory resources on your Evolution PBX by the various process on the system.  The CPU and RAM consumption are displayed in jiffies and MB, respectively, and ordered by process.

The data from this report includes information about what processes are consuming the CPU and RAM and at what levels.  A typical example of the process report: 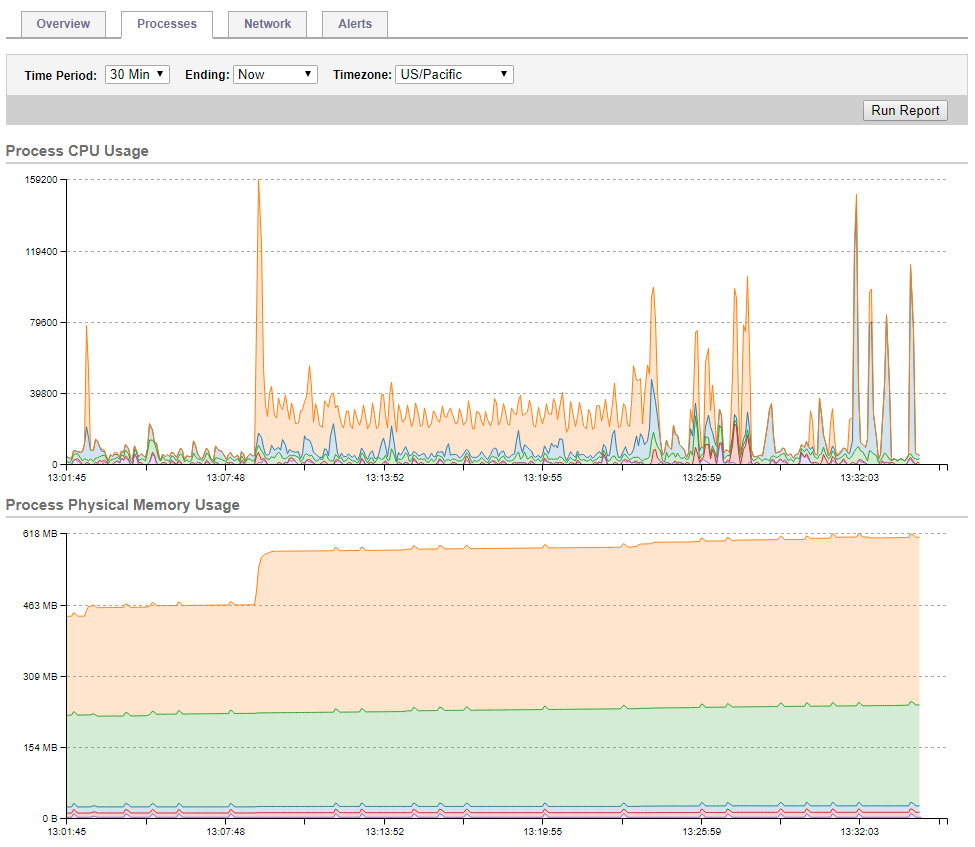 Another example of the process report: 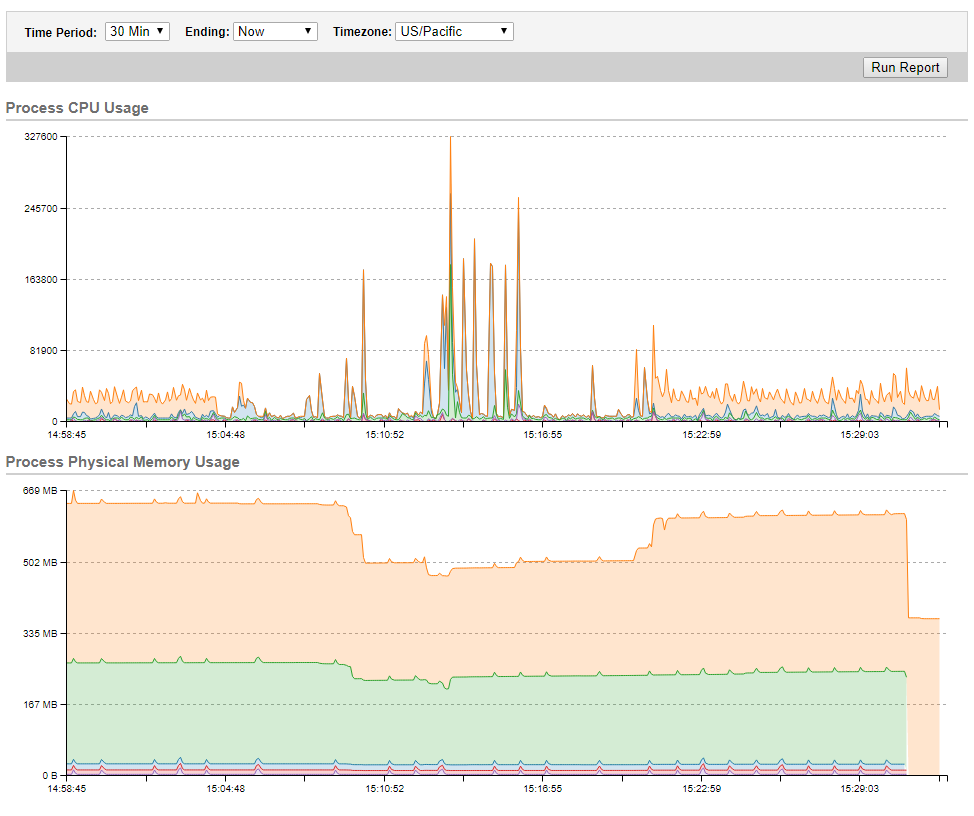 If you hover over any given time point in the output graphs, additional information regarding the processes and individual consumption is displayed: 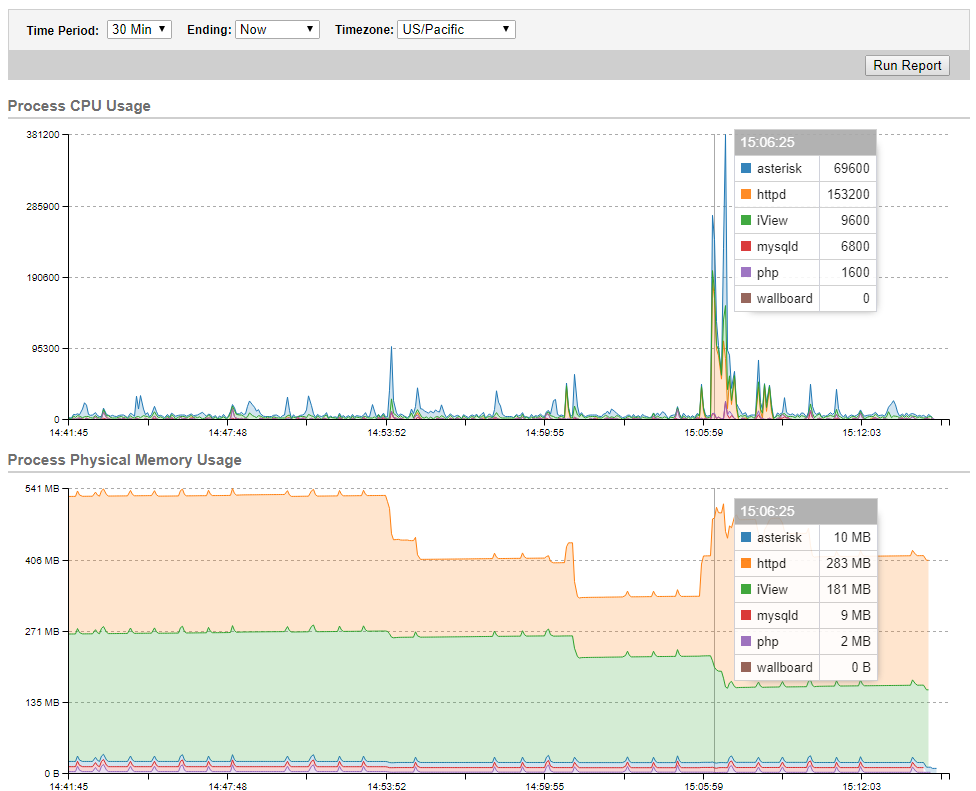 The Network Enterprise Monitoring report provides insight into the network throughput as well the packet and packet error rates on the system.  This can be extremely useful for troubleshooting LAN and WAN problems that typically cause issues such as degraded call quality or unreachable SIP peers.  Additionally, the network report provides the ability to add a host to consistently ping and chart the RTT (round trip time) from.

An example of the network report with the ping host entry field opened for editing: 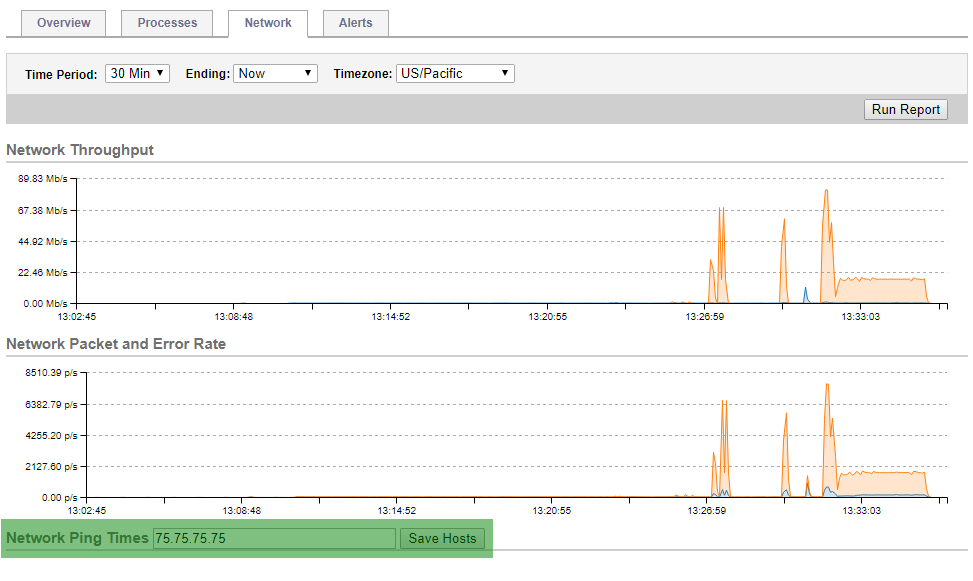 The network report after entering a host to measure the RTT from: 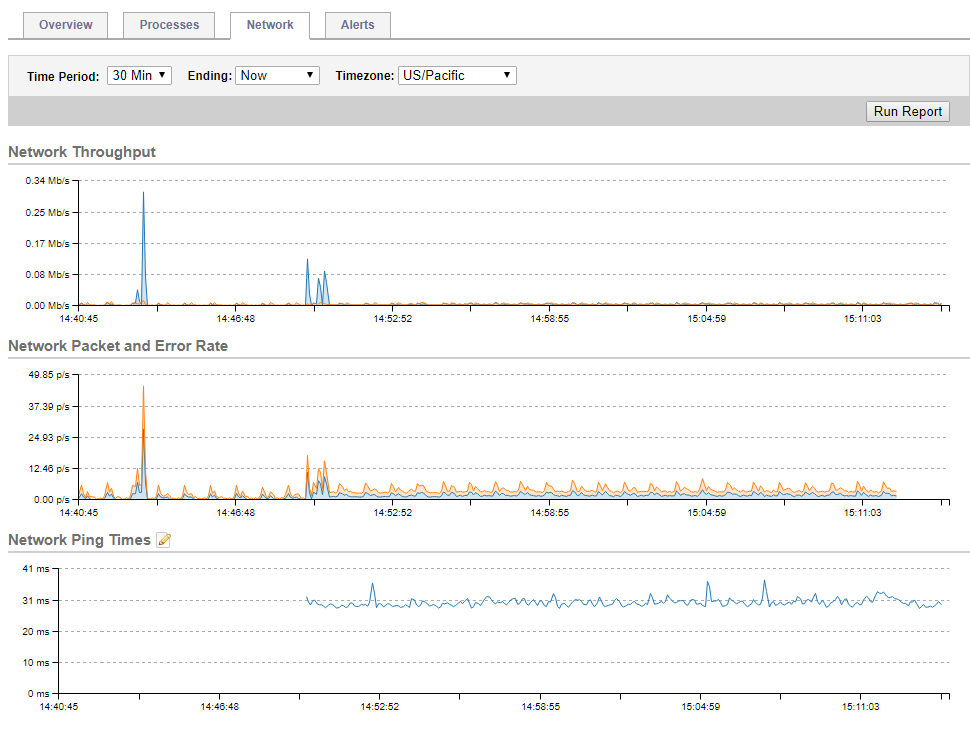 Another example of the network report showing RTT from a ping destination: 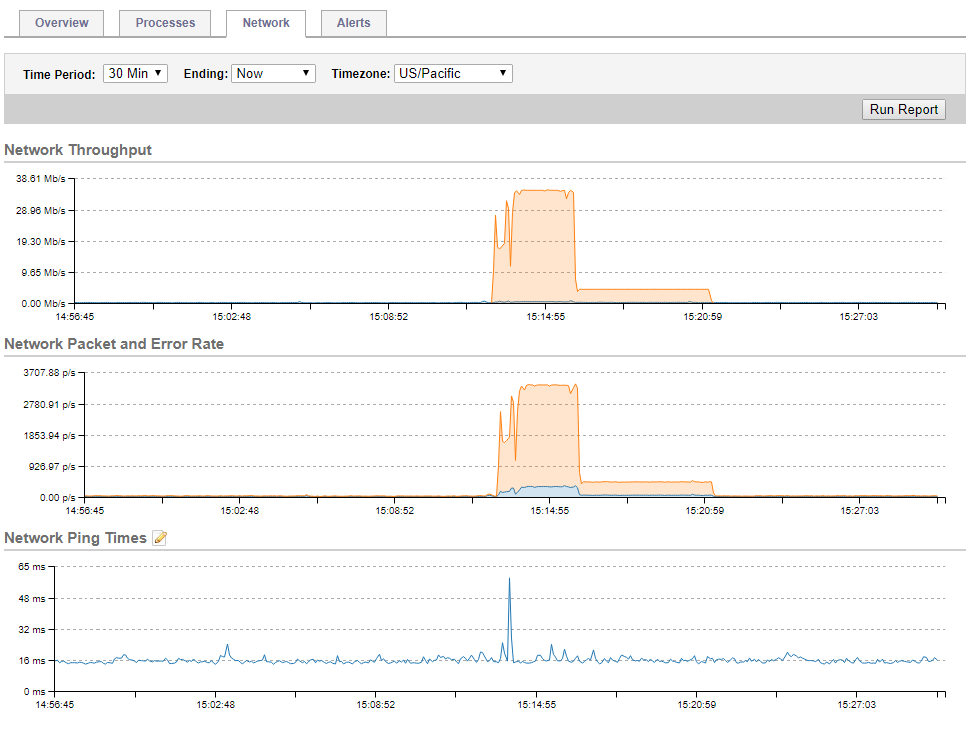 Note the jump in latency at approximately 15:13

In order to receive email alerts, you will need to ensure the system is delivering emails as well as enter your email address in the 'Alert Email' field as shown here:

After you have configured your email destination, you will need to make sure the thresholds for the resources on the system are set at appropriate levels and durations.

When an alert is received, it will appear as a simple email message from the system denoting what alert type was triggered as well as what the threshold and current value of the condition is:

After an alert generating condition has subsided, the system will generate another message advising of the alert type as well as the current and alerting thresholds:

Evolution also supports using webhooks, so system generated alerts can be directed to a webhook URL (as a JSON object) instead of sent as an email.  This is useful for a scenario where you would like to generate alerts on a secondary system.

For example, you would like alerts from Evolution to call a script on a NOC monitoring system, which in turn would create a notice in the local NOC environment, thereby bringing operators attention to the alerting condition.

To configure the webhook alerts you will need to define the alert types and the associated time-frames of the alerts, as well as enter the webhook URL as shown here:

Once the alerts have been configured and an alerting condition has been met, an alert via a webhook will be generated as a JSON object: 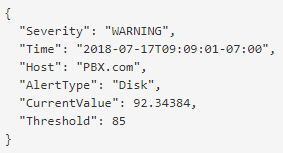 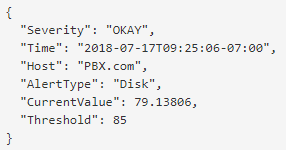 Similar to the emailed alerts, the webhook alerts will both include the threshold as well as the current value of the condition.